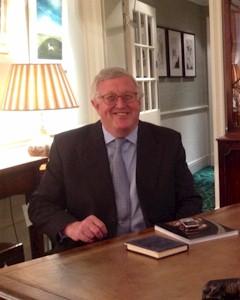 Guy Dennler has been dealing for the past thirty years and was Sotheby's Consultant for the West Country in 1990. He has since been dealing from his home and exhibits at the following fairs – BADA, Olympia and a few provincial fairs. He also has his own exhibition at The Sloane Club, Lower Sloane Street, London twice a year.

He deals in 18th and early 19th Century English furniture, decorative objects, lamps and a few decorative pictures. He also has his own Interior Decoration business including making curtains, blinds, sofas, chairs, stools etc and is good at placing furniture in clients' houses.

He has trade accounts with most of the fabric suppliers – Claremont Furnishing Fabrics Co, Colefax & Fowler, Lelievre, Zoffany, Osborne & Little, Turnell & Gigon, George Spencer amongst others.